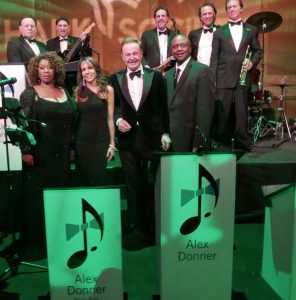 From New York’s Costume Institute Ball, to Versailles, to Mar-a-Lago, to San Francisco’s Black & White Ball and parties for three U.S. Presidents and many Forbes list executives, Alex Donner Entertainment is the music source for those who demand the best. From one Orchestra, ADE has grown to represent hundreds of top Orchestras, Bands, individual musicians and big-name talent. We have been honored to be called the “best entertainment provider in the east…if not the country,” by the New York Times. Our two principles have remained the same since our beginning twenty-five years ago -quality and affordability. 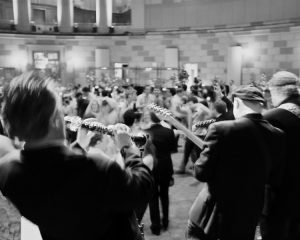 Our band has performed with Liza Minnelli, Harry Belafonte, Tony Bennett, Natalie Cole and Jimmy Buffett, among others. The prestigious venues the band has played in the U.S. include: the Kennedy Center; The Plaza Hotel; the Guggenheim; the Metropolitan Museum of Art, the Whitney Museum; many of the mansions in Newport, as well as the New York Botanical Garden. In Europe, they have played at the Palace at Versailles; Annabelle’s in London; in Athens & Rome; and for the opening of the Ballyfin manor home and resort near Dublin in 2011.

Alex Donner Entertainment is most widely known for its performances at weddings and charity benefits. According to Elegant Bride, “Playing the wedding reception…is an art in itself […] His orchestras have played at well over 500 weddings, over 50 each year. ‘Love notes’ from brides attest to many satisfied customers.” Notable wedding clients include Tory Burch and Yo-Yo Ma’s daughter Emily.

They have performed at benefits for: the American Cancer Society, NYC’s Animal Medical Center, Lenox Hill Neighborhood House, Ford Foundation, Southampton Hospital, the San Francisco Symphony and the Preservation Society of Newport. In Palm Beach they have often performed for the Norton Museum of Art, Lighthouse for the Blind and the Heart, Cancer and Preservation Societies benefits, among others.